The Daily Beast- The shah of Iran’s son took his life Tuesday, a decade after his sister died from an overdose. Omid Memarian and Roja Heydarpour on the family heartbreak and what it means for Iran. Plus, Stephen Kinzer reports on the death of the prince.

There is nothing worse for a mother than the death of a child, except, perhaps, the death of two children who took their own lives. That is what the former queen of Iran must endure now that her son, Ali-Reza Pahlavi, 44, was found dead in his home in Boston from a gunshot wound he inflicted on himself early Tuesday morning.

It isn’t the first time Farah Pahlavi has had to grieve a child who committed suicide. Just 10 years ago, former Princess Leila Pahlavi, whose young daughter suffered from anorexia and depression, took a lethal cocktail of cocaine and barbiturates, and died in her sleep at 31. 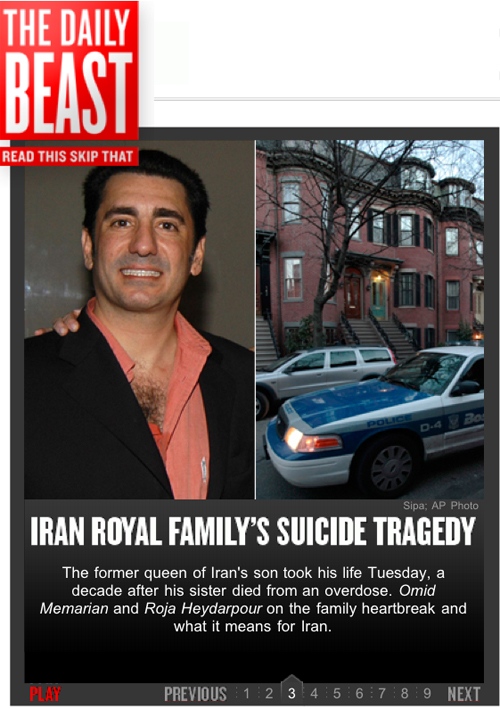 And so it seems Iran’s royal family, once at the pinnacle of riches and power, has lost its members one by one, never recovering from losing the throne more than 30 years ago.

“Like millions of young Iranians, [Ali-Reza] too was deeply disturbed by all the ills fallen upon his beloved homeland, as well as carrying the burden of losing a father and a sister in his young life,” wrote Reza Pahlavi, the eldest son who is still politically active and hopes to return to Iran as its leader one day, on his website. “Although he struggled for years to overcome his sorrow, he finally succumbed.”

On his mother’s website, a simple page for Ali-Reza that clearly has not been updated lists his résumé, along with a smiling picture. “Post Graduate: Harvard University (ancient Iranian Studies! Philology)” it reads. Followed by a list of his hobbies—sky diving, scuba diving, reading, flying. “Email: None for the time being.”
“These children grew up seeing their parents deposed of their power and glory and made into a global spectacle when they were very young.”

The children’s father, the former shah, Mohammad Reza Pahlavi, was dethroned in the 1979 Islamic Revolution that took root in an uprising that spanned all walks of life and political leanings before the Islamic government took power. Nearly everyone considered the shah corrupt and unjust. The family then moved to Egypt, Morocco, the Bahamas, and Mexico before settling in the United States.

Ali-Reza Pahlavi went to the best schools throughout his life. He never married, but was at one point considered an eligible bachelor.

He was engaged to Sarah Tabatabai for many years. But a few years ago, the engagement fell apart, leaving him alone again.

His neighbors told The Daily Beast that he mostly kept to himself, though they would spot him in his Porsche, wearing jeans and a tattered blazer. Unlike his brother, who is actively seeking to return to power, Ali-Reza never quite jumped into the spotlight. Neither did Leila.

”I have lived almost all my life abroad, but I’ve stayed just as Iranian as if I had never left my country,” Leila told Hola, a Spanish magazine, just months before her death. She was only 9 when she left.

“They were, like all other royal families, accustomed to a life of wealth, luxury, and power—and they violently and abruptly lost that life. I am sure it must have been quite traumatic,” said Hamid Dabashi, a professor at Columbia University and an Iran expert. “These children grew up seeing their parents deposed of their power and glory and made into a global spectacle when they were very young… Neither Europe nor North America, despite their family wealth, seems to have offered them a place of peace, solace, or above all usefulness.”

But even before the steep fall from power, there were signs that depression and melancholy ran in the family, said Abbas Milani, author of the recent book The Shah and the head of Iranian studies at Stanford University. As early as 1941, the CIA, the British Embassy, and the State Department profiled the shah periodically.

“From early on, one of the themes that is recurrent in the description of the father is that he is occasionally given to melancholy moods and, in one, is called a Hamlet-like figure; grief stricken and indecisive. This embryonic melancholy became profound during the last few months of the shah’s life in Iran. I think [Ali-Reza] was really hurt by what was happening. One ambassador [said he] has the mood of a jilted lover; someone who has put all his life for a woman or man and now is left by him or her,” Milani said.

The close family friend said that one of the surviving daughters, Farahnaz Pahlavi, also suffers from depression.
Despite the clearly tragic nature of Ali-Reza’s death, and his sister’s before that, the pain, bitterness and sense of injustice that brought on the revolution that overthrew the shah runs so deep in Iranians—both inside and out of the country—that life-long rivalries and indignities will not be so easily overlooked.

In a country where long, drawn-out mourning periods are the norm, it remains to be seen what impact Ali-Reza’s death will have on a society in turmoil.

In an interview with The Daily Beast, an activist for the Green Movement inside Iran, which started after the contested presidential election of Mahmoud Ahmadinejad in 2009, didn’t think the impact of the death would be too big in Iran.

“With what I know of the Iranian society, I doubt there is widespread public support for this family,” he said on the condition of anonymity because it’s taboo to speak on the record about the monarchy. “That’s why news pertaining to this family does not receive a huge reaction among young Iranians. Of course, it might create discussions and dialogues among the older [Iranians]. But for the generations who were born after the revolution, this family and their fate has no significance, or has low significance.”

Indeed, aside from a loyal group of monarchists in exile, very few Iranians pay heed to the Pahlavi family’s aspirations to return to power, making the news of Ali-Reza Pahlavi’s suicide that much more heart-wrenching. Even for the eldest surviving brother, Reza, there is something nearly suicidal in grasping for a throne that will never be again. Still, he has some connection to the world outside himself.

“[Ali-Reza and Leila] were not married, they did not have anyone else who was living with them, one was living in a hotel, one living in an apartment, so their ties are not as great as Prince Reza’s ties. Prince Reza has an office, has family, children, all of these things are positive indications of connections to life. When those connections are missing that’s when a life becomes enormously fragile,” Milani said.

Omid Memarian is columnist whose writing has appeared in The New York Times, The Los Angeles Times, The San Francisco Chronicle and other publications. He was a World Peace Fellow at the UC Berkeley Graduate School of Journalism in 2007-2009 and the 2005 recipient of the ‘Human Rights Defender Award’, the highest honor bestowed by Human Rights Watch.

Roja Heydarpour is an editor at The Daily Beast. She has reported for the The New York Times and The Times-Tribune.